Daddy Bruce was the restaurateur who provided holiday feasts for Denver’s needy for more than 25 years before his death in 1994 at the age of 94.

He began feeding the hungry in the 1960s with a Thanksgiving dinner for 200 persons at City Park, where he carried his portable grill and dished out holiday dinner.  It became a tradition and his Thanksgiving meal giveaway grew astronomically year after year.

For many years he donated his own time and money to serving Thanksgiving dinners.  He later took in donations and many local celebrities — including members of the Denver Broncos, the owner Pat Bowlen, the police department, and members of the clergy.  They all helped Daddy Bruce dish out tons of turkey, ribs, dressing, potatoes, and yams.  He also gave away clothes and food on his birthday, Easter and Christmas.  One year he even dyed 25,000 eggs for an enormous Easter Egg hunt in City Park. 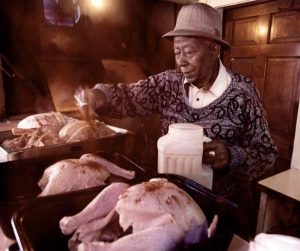 His example of living for the sake of others and taking responsibility for his own community and its needs became an inspiration that lives on years after his death.  The Feed a Family event in honor of Daddy Bruce Randolph provides 5,500 gift boxes that feed a family of 8. More than 35,000 received meals during the Thanksgiving holiday season. This event is still one of the largest projects of its kind in the nation.

Daddy Bruce who started his business at the incredible age of 63, not only showed amazing perseverance and determination but also a “heart of gold”.  He would spend his last cent helping those who were less fortunate.  Even though history will indicate that Daddy Bruce died penniless, it will also show the rewards and accomplishments that he made during his life. 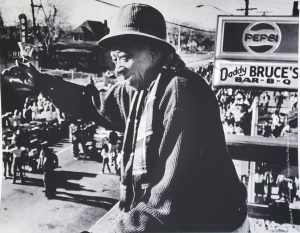 He was a man who surely “buried his treasures in Heaven”.  (Matthew 6:20)  Although Daddy Bruce died broke, these facts will show the rewards and selfless gestures he accomplished while making a living.  Daddy Bruce was nominated for the humanitarian congressional medal of honor by Patricia Schroeder, U.S. House of Representatives from Colorado’s 1st district, in October of 1986.

Your Support Means a Lot

Each donations matter, even the smallest ones.